Welcome Mark Lindsay to CREEC’s Board of Directors! 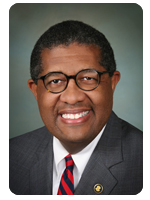 CREEC is very excited to announce that Mark Lindsay, Director of the Healthcare and Pharmaceuticals practice area of The Livingston Group LLC, has joined CREEC’s Board of Directors.

Here are just some of Mark’s many accomplishments, plagiarized shamelessly from his Livingston Group page:

Prior to his appointment to the White House, Mark served as senior legislative aid and counsel to Congressman Louis Stokes (D-OH).  He worked closely with Democrats and the Congressional Black Caucus on a number of business and economic issues.

Mark was a member of Senator Hillary Clinton’s Minnesota Finance Committee for her 2008 Presidential campaign.

Before joining The Livingston Group, Mark was with UnitedHealth Group, one of the world’s largest healthcare companies, where he held a number of senior positions including President of the AARP Pharmacy Services Division and Vice President of Public Communications and Strategy.

Mark holds a B.A. from Macalester College in St. Paul, Minnesota; a J.D. from Case Western Reserve University School of Law; an M.A. in International Affairs from Georgetown University; and a graduate degree from the Advanced Management program at the University of Pennsylvania’s Wharton Business School.  He is a member of the District of Columbia Bar.

Amy was privileged to work with Mark early in her career when they were both associates at Dorsey & Whitney in Minneapolis.  They both moved to Washington, D.C. around the same time, and Amy and Tim got to spend time with Mark and his wife, Carla Morris.  Tim and Amy have been hoping to have the chance to work with Mark again, and are very pleased that he has agreed to serve on CREEC’s board.

CREEC’s board and staff extend a hearty welcome to Mark!