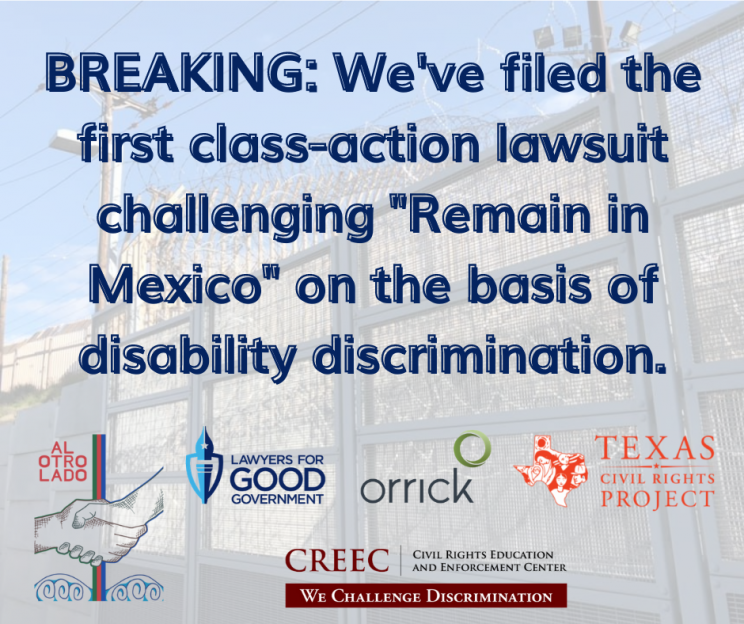 Today, asylum seekers with disabilities who are forced to wait for immigration proceedings in Mexico filed a lawsuit against the Trump administration for its “Migrant Protection Protocols (MPP) policy. It is the first class-action suit challenging MPP’s discriminatory practices on the grounds that they discriminate on the basis of disability. If it succeeds, not only would it hold the Department of Homeland Security (DHS) accountable, hundreds of class members with disabilities would likely be allowed to wait in safer conditions stateside with their sponsors.

Under the U.S. Customs and Border Protection’s (CBP) own stated procedures at the time of filing, asylum seekers with “known physical or mental health issues” cannot be sent to Mexico. (This policy has since been updated.) The lawsuit argues that the Trump administration’s practices infringe on federal disability protections, including Section 504 of the Rehabilitation Act of 1973.  They may also violate the Administrative Procedures Act, trapping hundreds of asylum seekers with disabilities and their families in Mexico at enormous risk to their health and safety.

“The ‘Remain in Mexico’ policy is inherently unfit and violent for any asylum seeker, but it is particularly dangerous, and unlawful, for those living with disabilities,” said Erin Thorn Vela, senior attorney with the Texas Civil Rights Project. “Our lawsuit is demanding that the Trump administration comply with its own stated policy. But let’s be clear, this policy has created a humanitarian catastrophe for tens of thousands of people who have the legal right to seek asylum but have been effectively barred from that right by the actions of this administration.”

The Trump administration began MPP, also known as “Remain in Mexico,” in Tijuana in January of 2019. By May of 2019 it had rolled out border wide. “Remain in Mexico” has upended decades of internationally-accepted asylum seeker practice. It has forcibly removed approximately 68,000 asylum seekers from the United States, including people with disabilities and young children, to await immigration proceedings in squalid conditions and refugee encampments.

“After countless hours imploring Customs and Border Protection to protect our clients with disabilities or severe and emergent medical needs by processing their asylum hearings safely in the United States, it was clear we needed to take additional action.” said Charlene D’Cruz, Director of Project Corazon Border Rights Program at Lawyers for Good Government Foundation. “We’re honored to partner with this esteemed group of immigration advocates and attorneys to bring this lawsuit, enforcing critical protections for those with disabilities and their legal right to seek asylum.”

“The Trump administration’s policy forcing asylum seekers to wait in Mexico, including those with disabilities, flies in the face of our government’s obligations to people with disabilities. Such cruelty towards people seeking safety at our border is not only immoral, it’s illegal. We’ve sued to make it stop,” said Elizabeth Jordan, Immigration Detention Accountability Project Director at CREEC.

“Forcing asylum seekers to wait in Mexico is a stain on our country, and denies vulnerable immigrants their international and federal right to ask for protection. This administration knows that this inhumane policy hurts everyone subjected to it, but certain groups even more, such as people suffering disabilities or serious health problems. We are suing to take our country back to acting on its best principles, and not its worst impulses as it is now,” said Diego J. Aranda Teixeira, Supervising Attorney for Litigation at Al Otro Lado.

“This policy is not only unconstitutional, it targets the most vulnerable people seeking refuge in our country,” said Rob Shwarts, Partner, at Orrick Herrington & Sutcliffe LLP. “We’re proud to lend pro bono support from the legal community to protect those with disabilities hoping to come to the United States through the asylum process.”

The suit was filed by the Texas Civil Rights Project, Civil Rights Education and Enforcement Center (CREEC), and Orrick Herrington & Sutcliffe LLP, with support from Lawyers for Good Government Foundation and on behalf of individual plaintiffs and organizational plaintiff Al Otro Lado. You can read the complaint here.

Among several plaintiffs in this class action, included are:

Lawyers for Good Government Foundation (L4GG) coordinates large scale pro bono programs and issue advocacy efforts to protect human rights and ensure equal justice under the law, and has a network of 125,000+ lawyers to assist in its efforts. L4GG runs Project Corazon, an immigrants rights initiative in Matamoros, Mexico providing legal assistance to asylum seekers who are forced to remain in refugee camps due to the administration’s MPP policy.

Orrick Herrington & Sutcliffe LLP has 27 offices worldwide, and focuses on serving the Technology, Energy & Infrastructure and Finance sectors globally.  Clients worldwide call on Orrick’s teams for forward-looking commercial advice on transactions, litigation and compliance matters. The firm has been recognized as one of the leaders in pro bono in the legal industry.

The Texas Civil Rights Project is boldly serving the movement for equality and justice in and out of the courts. We use our tools of litigation and legal advocacy to protect and advance the civil rights of everyone in Texas, and we partner with communities across the state to serve the rising movement for social justice. We undertake our work with a vision of a Texas in which all communities can thrive with dignity, justice and without fear.