From the Back of the Bus to No Bus at All.

A lily-white Ohio suburb is doing everything it can, including risking millions in federal highway funding, to keep mostly minority bus-riders from a nearby city from entering their community.

When the regional transit authority tried to run public buses through Beavercreek, a 90% white suburb, the burb started putting up hurdles, for example,

mandating that bus shelters included heated and air conditioning as well as high-tech surveillance cameras, features that would be hugely expensive and are not common at other stops.

The Federal Highway Administration has ordered them to permit the bus stops.   Despite possible loss of funding and mounting legal fees, the suburb is apparently considering defying the order.

This is, sadly, not unusual.   Ever wonder why there’s no Georgetown metro stop?* 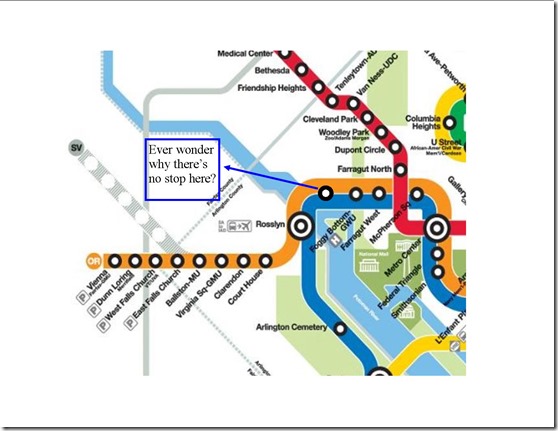 In an oral history interview with one Cooby Greenway, we learn that she and the Citizens Association of Georgetown were instrumental in the

great effort to stop the highway construction that was being started in Washington through the city, and the Metro from having a stop in Georgetown.

Ever wonder why the County Line light rail stop required pitons and climbing shoes to get to the Park Meadows mall?   Diane Carman:

I stood on the platform looking at Nordstrom. To get there, I would have to cross the train tracks, climb a chain-link fence, drop 25 feet straight down onto the road, cross four lanes of traffic, scramble over a grassy berm and traverse the parking lot to the mall. . . . Park Meadows might as well have had a moat around it.

Although there is access now, Carman reported that the previous owners of the mall originally refused to permit the transit authority to provide access.   They had no comment.

Anyone can get on the bus now;** the bus just won’t go where it’s needed.

* Except in the movie No Way Out.