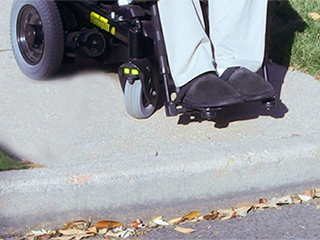 A class action lawsuit filed today in the United States District Court for the Western District of Washington alleges that the City of Seattle has failed to comply with the Americans with Disabilities Act, Rehabilitation Act and state law, which require the City to provide people with mobility disabilities full and equal access to Seattle’s pedestrian right of way through a system of usable and accessible curb ramps. People with disabilities are the largest minority group in the country; census figures estimate that 56.7 million, or 1 in 5, Americans has a disability. Many of those individuals use wheelchairs, walkers, scooters, or other mobility devices to get around. Missing, broken or poorly maintained curb ramps, however, prevent people with mobility disabilities from using city sidewalks, crosswalks and other walkways to participate in daily activities.

“I was born just a couple years before the ADA was passed,” said Conrad Reynoldson, one of the plaintiffs bringing the case. “I grew up being told I could live in an inclusive community, but there are public places I cannot safely go because they don’t have curb ramps.”

David Whedbee, another plaintiff, explains “the problem with the lack of curb cuts, or their current orientation, is that I have to swing out into lanes of on-coming bus and car traffic to make it up or down the sidewalk where I frequently travel on my way to work and other places downtown. You should try that in an office chair and see how safe you feel.”

“A lot of attention is being paid to making Seattle more walkable, but not enough has been put into making it more roll-able” said David Carlson Director of Legal Advocacy for Disability Rights Washington. “As a cyclist and parent who uses a stroller, I certainly know how convenient it is to have proper curb ramps. However, for people with disabilities, this isn’t a matter of convenience.  It is a matter of basic civil rights to safely and equally access one’s community.”

“Federal and state disability access laws were enacted to provide persons with disabilities an equal opportunity to fully participate in civic life,” said Linda Dardarian attorney with Goldstein, Borgen, Dardarian & Ho. “The ADA and the Rehabilitation Act have long required cities to install and maintain accessible curb ramps to ensure that people with disabilities can travel independently throughout their communities. Before these federal laws, Washington law also required installation of curb ramps at intersections and crosswalks as early as 1973.”

Click here to read the Complaint to City of Seattle

Disability Rights Washington has also launched a social media campaign today to raise awareness of the systemic problem of inaccessible curb cuts. For more information about how to share your experience, go to www.disabilityrightswa.org/curb-cuts or follow the Twitter and Facebook hashtag #CrappyCurb.