Stop Texting and Driving or You’ll Turn Black. Or Latino. Or Christian.

I often try to convey why non-but-should-be-obvious disability prejudice is in fact prejudice — and wrong — by swapping out the disability feature for another human category:   race; national origin; religion.   Though imprecise and fraught with opportunities for me to put my foot in my mouth, it’s a useful thought exercise.

Let’s try it with the appalling tendency to use disability as a threat.

Here is a half-hour long documentary by Famed Director Werner Herzog — that’s his title, right? — on why texting and driving is a bad idea.   Just get yourself to the 1:55 mark or start again at the 15:00 mark.   Big trigger warning:   I knew what was coming, but it still kicked my butt.

{Video description:   Most of it is audible, but at the 1:55 mark, following a long description of the mother’s high hopes for her son, we see him come home from school in a power wheelchair with a tracheotomy and vent.   While he appears to happily interact with his mother and sister after a day at school, the portentous music and voiceover of failed hopes continue.   At the 15:00 mark, a story about a woman brain-injured in an accident begins.   While she does eventually speak for herself, much of the dialog — by her sister — occurs with the two sisters sitting side by side in lawn chairs, the woman with the brain injury sitting passively while her sister describes her limitations.}

Thought exercise:   Somber music.   Long portentous introduction — “I had high hopes for my son; I used to love doing this or that with him” — leading to the shocking reveal:   “I can’t do any of that any more because now . . . he’s Christian.”   Long voyeuristic shot — with somber music — of ordinary-looking boy reading the Bible.

Or.   “I can’t do any of that any more because now   . . .   she’s African-American.”   Long voyeuristic shot — with somber music — of ordinary-looking African-American girl.

That is what this documentary says about disability.   A normal part of the human spectrum is portrayed as the frightening and pathetic result of That Thing We Want You To Stop Doing Or Else.

Indeed, this “documentary” goes beyond just disability-as-threat to reinforce stereotypes of people with disabilities as incompetent and burdensome to their families.   The boy who uses a vent is “on life support” and his mother “can’t just say “˜go play in the yard'” because “it’s a production.”   The woman with a brain injury is completely dependent on her siblings.   Worst of all, the vast majority of the talking is by others, about and in the presence of the disabled person, not by him or her.

It is not easy viewing, but, for the “more than 40,000 high schools” and “hundreds of safety organizations and government agencies” where it will be shown, I suspect it will be effective.

So in 40,000 high schools, teens will be taught to look on their disabled classmates not as peers but as pathetic, dependent, threats of the horrible life that awaits them if they transgress.

I get that texting and driving is a very bad thing.     Seems like you could make that point based on the two segments about people who were killed in the resulting accidents.   Hell, this photo alone would be enough to make me change my ways (and what texting teen is going to pay attention through 34:56 of ponderous music?): 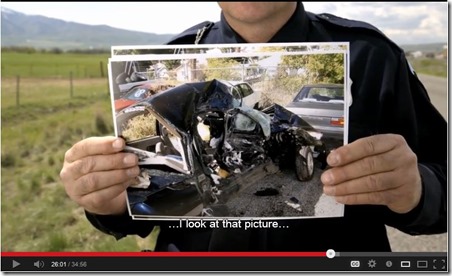 {Image description:   Most of the photo (which is a screen grab from the video) is occupied by another photo of a badly wrecked car.   The entire side of the car is mangled and the car has burned.   The photo is being held in front of the camera by a policeman (we see just his fingers holding up the photo and his uniform shirt behind it) who is standing by the side of a rural road.}

I’m wondering if a critical mass of push-back on this could get them to edit it down to the two dead-people segments.   Shorter, more compelling, and less likely to foster discriminatory attitudes in the students who view it.